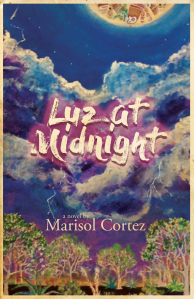 Learned the week before last that Luz at Midnight, my novel manuscript, was accepted for publication by the amazing FlowerSong Press! I can’t even tell you how excited I am. I can tell you that when I saw the email in my inbox from editor Edward Vidaurre–Poet Laureate of the Rio Grande Valley–I literally cried tears of joy. At the time I was on a work call with the NEA, taking notes on why our grant application from last year wasn’t funded (“The panel noted that they really appreciated the mission and the intention behind the work samples,” I typed, “but noted that they thought the execution of them did not demonstrate the highest artistic excellence”). About five minutes of notes from the end of this call went missing as I silently screamed and danced around the room.

For those of you interested in the internal process of writing, submitting and publishing, here are some stats:

–it took me about five years to produce a finished first draft of the manuscript. I wrote it entirely in text files, one file per chapter, which soothed my jumpiness at the prospect of writing something as big and serious as a novel (“eh, it’s not a novel, it’s just a bunch of text files.”)

–from first draft until I felt ready to submit for publication took another four years and three rounds of revision.

–after I felt ready to send it out, I spent about a year researching presses, writing and refining my query letter and synopsis, and submitting.

–I sent Luz to about 30 presses in total and, before FlowerSong, was rejected by all of them, though one (Forest Avenue) notified me that I’d made their shortlist of ten (before rejecting the book). Far from a disappointment, however, this actually turned out to be a huge morale booster.

So, the book. What’s it about? Here’s the synopsis I sent out:

In a genre-hopping narrative that layers story with reporting, poetry, scholarship, and street teatro, Luz at Midnight tells the story of an ill-timed love that unfolds in the time of climate change between a naïve academic and a muckraking environmental reporter. Citlali Sanchez-O’Connor is a newly-minted Ph.D. who has just returned home to San Antonio to find herself hired by a grassroots environmental group to lead a local climate campaign, despite her lack of activist experience. Soon she encounters Joel Champlain, an alt-weekly journalist desperate to hide his manic-depression from the city as he uncovers the corrupt politics around “gleaning,” a controversial new mining practice which promises a rapid transition away from fossil fuels.

As Joel and Lali separately seek to make sense of the political scandals that surround gleaning, their paths cross during a chance trip to the Texas Gulf Coast. There, Lali finds herself struck by a love as sudden and powerful as the electrical storm that birthed Luz, the unearthly canine trickster who has thrown them together. But Lali—married with a young child, poised to leave town again for an academic job, and trained to think everything is explicable—finds she must decide what their connection means, if anything, for a path seemingly already set in motion.

As we learn more about the politics of “gleaning” through Joel’s gonzo journalism and Citlali’s fumbling efforts to build resistance to the powers-that-be, Luz at Midnight raises bigger questions about the crossings and perturbations that reveal the organizing (and disorganizing) forces of desire and political struggle. What makes things run? What force impels the workings of power, and what agency powers the universe? Do we have any agency of our own to create a different world, or to disrupt what powerful others have already planned for us? What throws us into the path of those we love, and what pulls us apart?

Along the way, the novel is also about the humorous (and not-so-humorous) inner workings of the nonprofit-industrial complex; about Newtonian and Quantum theory; about birds and about dogs. It is also about what we call mental illness, and the possibility that love may be pathology, while madness may open some important window into the nature of reality. A cli-fi (climate change fiction) love story and hybrid text that straddles fiction and non-fiction, Luz at Midnight will appeal to readers with an interest in Chicanx literature, environmental justice, and mental health.

A lot of it is based on Stuff That Really Happened, a lot of it is totally made up. What can I say? It’s a work of fiction. I’m profoundly excited (and also terrified) to release it into the world next spring or summer 2021. I’m equally grateful to everyone (and there were many) who helped, supported, buoyed, edited, read, and encouraged me along the way.

4 thoughts on “Luz At Midnight Out Soon”

come celebrate as my book leaves the nest in an official way. thank you to @jrboitel @edward_vidaurre and @flowersongpress for hosting and for the beautiful flyer.
grackle traces. by asra.
BBz is two today!! wewepak-ghee keke (ladybug cake) we made, courtesy the miracles of fondant
@gharmanity and I made a book trailer for Luz...it premieres Sunday, Jan 3 at 4pm:
true story. I walk into the living room and Pak-ghee (how BBz pronounces “Constant Comment,” name of the compatriot of Earl Grey whose window climbing I’ve also featured here) is in my living room. What the? I say and toss her (gently, purring) outside then return to the bedroom. Walk back out into living room and there she is AGAIN. How??? This is how.
*cries*